Tourism Bureau spokescouple Kim Jae-woo and his wife make a surprise appearance to promote tourism in Taiwan with Oh!Bear


The Tourism Bureau recently concluded a 5-day Taiwanese gourmet food truck tour in Busan, Daegu, Gwangju, and Seoul. The event attracted at least 2500 people, generating 1,378 check-ins on social media, and 224 news had been released, as well as plenty of online discussions and interactions. A total of 2,500 meals were handed out, demonstrating Taiwanese people's passion for traveling.

The Tourism Bureau served iconic Taiwanese dishes such as miners' bento and bubble tea for the food truck experience. In particular, miners' bento features abundant, nutritious ingredients such as spare ribs, a wide selection of side dishes, eggs, etc., making it a favorite delicacy of Jinguashi among travelers along the Yeshijinjiu route (Yehliu, Jinguashi, Jiufen, and Shifen)! After enjoying the delicious miners' bento in Jinguashi, you may also take the lunch box and tableware home as souvenirs!

For the first major offline event held by the Tourism Bureau since the pandemic, it has spared expenses in introducing authentic miners' bento and bubble tea to Korea and sharing them with the public, thereby demonstrating the Tourism Bureau's emphasis on the Korean market.

According to the Tourism Bureau's spokescouple, Kim Jae-woo and his wife are thrilled to partake in the event as the Tourism Bureau's spokescouple. Speaking of Taiwan, images of night market delicacies immediately come to mind; however, a plethora of Michelin and Bib Gourmand-recommended gourmet foods are also available! Taiwan has opened up its borders since October 13, so everyone is welcome to visit the country and experience its diverse charisma! See you in Taiwan! 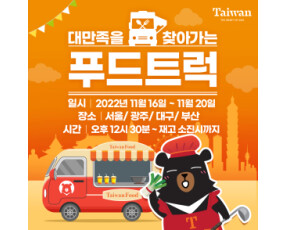