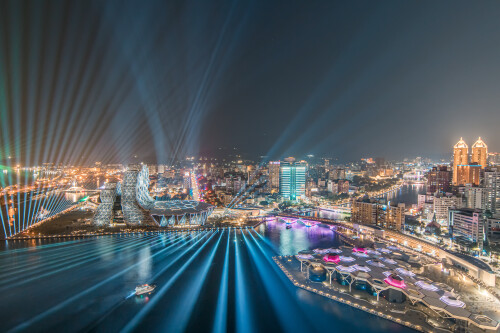 Taiwan Lantern Festival 2022 revolves around the theme of "Zoom in to Taiwan, Highlight Kaohsiung." A ray of light is geometrically configured to form the first Chinese character of the city's name, ablaze. The concept of light is further accentuated with the use of bright colors, thereby spotlighting the city's warmth and geniality and the exciting array of lantern works at the festival.

The main lantern at Weiwuying marks a first attempt at incorporating the art of calligraphy. While Weiwuying is located in the port city's Fengshan District, this collaboration of artist Benson Lu and calligrapher Tong Yang-tze centers on the first of the name's two Chinese characters: feng, or phoenix. Aptly dubbed "Phoenix Dancing," the work readily conjures up an image of lively and vigorous flourishes in calligraphy.

Weiwuying is home to the world's largest single-roofed performing arts center. Complete with woods, fungi, and a lake against rolling hills, the Weiwuying Metropolitan Park stands out as a fitting land art venue for Taiwan Lantern Festival 2022.

At the Love River Bay site, in the spotlight, literally, is "Absorbed by Light." The seat left vacant on the bench means that anyone can sit down and become part of the work. The widely shared worry about the interpersonal isolation caused by smartphones does not stop many from congratulating themselves for having such gadgets to perform daily chores, solve problems, keep track of the pandemic, and stay one with the world.

Two decades ago, Taiwan Lantern Festival showcased a refreshingly new look of the Love River. Upon the festival's return to Kaohsiung two decades later, residents and visitors are invited to see for themselves how the city has progressed in city governance, lighting aesthetics, and smart environment. A reborn Kaohsiung awaits you! 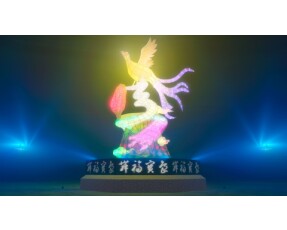 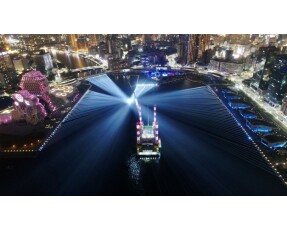