The Flexi Group manages 45 locations in 12 cities and 9 countries in Asia and Australia under regionally-recognized brands the Hive, Common Ground and The Cluster. Combination values The Flexi Group at an implied pro forma enterprise value of $205 million

The transaction is expected to be completed in the second quarter of 2023, subject to regulatory approvals and other customary closing conditions. After closing, The Flexi Group's ordinary shares are expected to trade on the Nasdaq Stock Market LLC under ticker symbol FLXG.

Unified in 2022 following a merger of three leading brands, The Flexi Group has a combined 25 years of experience designing, building and operating flexible workspaces in Asia and Australia. They are one of the region's largest flexible workspace operators with 45 locations in 12 cities and 9 countries including Australia, Singapore, Malaysia, Hong Kong, Thailand, Philippines, Taiwan, Vietnam and Japan.

Unlike other flexible workspace operators, The Flexi Group takes an asset-light approach to its real estate ventures, partnering with landlords on joint ventures instead of leasing office space and taking on potentially significant financial obligations under rental agreements. By partnering with The Flexi Group, landlords can offer increased flexibility to tenants, as well as improve greater building engagement by offering them access to events, agile work solutions and bookable meeting and event spaces.

The Flexi Group's multi-brand for a multi-demographic approach is unusual in the industry and creates the opportunity to partner with landlords across a variety of asset classes with differentiated pricing, building, location, and office size preferences, thus allowing each brand to grow strategically across the globe.

Following the business combination, The Flexi Group plans to embark on a consolidation strategy across APAC into North America, UAE and Europe.

The definitive business combination agreement reflects an implied pro forma enterprise value of $205 million. Marshall & Stevens Transaction Advisory Services LLC rendered an independent fairness opinion as to the fairness of the consideration from a financial point of view.

The transaction, which has been unanimously approved by the Boards of Directors of The Flexi Group and TGVC, is subject to approval by TGVC's and The Flexi Group's shareholders. Completion of the transaction is also subject to customary closing conditions, including that TGVC hold net tangible assets of at least $5,000,001 immediately prior to closing, net of redemptions and liabilities (including TGVC's transaction expenses).

Additional information about the proposed transaction, including a copy of the business combination agreement, will be available in a Current Report on Form 8-K to be filed by TGVC with the U.S. Securities and Exchange Commission (the "SEC") and at www.sec.gov.

TGVC, along with the management of The Flexi Group, plans to hold a webcast to discuss The Flexi Group business model and opportunity after the filing of the related Registration Statement on Form F-4, which is expected to occur in early 2023. The webcast, detailed investor presentation, and all other materials presented during the webcast will be available on TGVC's website at https://tgventureacquisition.com. Additionally, TGVC will file the investor presentation with the SEC as an exhibit to a Current Report on Form 8-K, which will be available on the SEC's website at www.sec.gov.

About TG Venture Acquisition Corp.
TG Venture Acquisition Corp. is a blank check company led by Chairman and Chief Executive Officer Patrick Tsang, along with CFO Philip Rettger and directors Michael Alexander, Komal Ahmed and Jason Cheng Yuen Ma. TGVC was formed for the purpose of effecting a merger, capital stock exchange, asset acquisition, stock purchase, reorganization or similar business combination with one or more businesses. TGVC focuses on industries where its management team and founders have experience and insights and can bring significant value to business combinations.

About Tsangs Group
Tsangs Group is an innovation-focused global family office that bridges East and West. Tsangs Group's mission is to invest in global opportunities that allow it to exert positive influence and drive positive impact in Hong Kong, Asia and beyond. Headquartered in Hong Kong, Tsangs Group has direct investments across the world, and seeks out positive impact investments that reflect its values of innovation, sustainability, and togetherness. Tsangs Group's strategy is opportunistic and both sector and location agnostic. From fintech to entertainment to space travel, Tsangs Group is always investigating, analyzing, and supporting the cutting edge of global innovation and development. For more information, please visit:

Investors and shareholders will be able to obtain free copies of the registration statement, the proxy statement/prospectus and all other relevant documents filed or that will be filed with the SEC by The Flexi Group, TGVC or any successor entity thereof through the website maintained by the SEC at www.sec.gov.

The documents filed by TGVC with the SEC also may be obtained free of charge upon written request to TG Venture Acquisition Corp, 1390 Market Street, Suite 200, San Francisco, CA 94102 or via email at

[email protected]. The documents filed by The Flexi Group or any successor entity thereof with the SEC also may be obtained free of charge upon written request to The Flexi Group Holdings Ltd., Wisma UOA II, Penthouse 16-1 Level 16, No.6, Changkat Semantan, Bukit Damansara, 50490 Kuala Lumpur, Malaysia or via email at

Participants in the Solicitation

This press release is not a proxy statement or solicitation of a proxy, consent or authorization with respect to any securities or in respect of the potential transaction and shall not constitute an offer to sell or a solicitation of an offer to buy the securities of TGVC, The Flexi Group or any successor entity thereof, nor shall there be any offer, solicitation, or sale of any such securities in any state or jurisdiction in which such offer, solicitation, or sale would be unlawful prior to registration or qualification under the securities laws of such state or jurisdiction. No offer of securities shall be made except by means of a prospectus meeting the requirements of the Securities Act of 1933, as amended (the "Securities Act").

Many factors could cause actual future events to differ materially from the forward-looking statement in this press release, including but not limited to: (i) the failure to satisfy the conditions to the consummation of the transaction, including the adoption of the business combination agreement by TGVC's shareholders, the satisfaction of the minimum trust account amount following any redemptions by TGVC's public shareholders, (ii) the occurrence of any event, change or other circumstance that could give rise to the termination of the business combination agreement, (iii) the effect of the announcement or pendency of the transaction on The Flexi Group's business relationships, operating results and business generally, (iv) risks that the transaction disrupts current plans and operations of The Flexi Group, (v) the outcome of any legal proceedings that may be instituted against The Flexi Group or TGVC related to the business combination agreement or the proposed transaction, (vi) costs related to the transaction and the failure to realize anticipated benefits of the transaction or to realize estimated pro forma results and underlying assumptions, including with respect to estimated shareholder redemptions, (vii) the risk that The Flexi Group and its current and future collaborators are unable to successfully develop and commercialize The Flexi Group's products or services, or experience significant delays in doing so, (viii) the risk that The Flexi Group may need to raise additional capital to execute its business plan, which many not be available on acceptable terms or at all, and (ix) the risk that the post-combination company experiences difficulties in managing its growth and expanding operations. The foregoing list of factors is not exhaustive. You should carefully consider the foregoing factors and the other risks and uncertainties described in the "Risk Factors" section of the registration statement on Form F-4 and proxy statement/prospectus discussed above and other documents filed or to be filed by TGVC, The Flexi Group and/or or any successor entity thereof from time to time with the SEC. These filings identify and address other important risks and uncertainties that could cause actual events and results to differ materially from those contained in the forward-looking statements. Forward-looking statements speak only as of the date they are made. Readers are cautioned not to put undue reliance on forward-looking statements, and The Flexi Group and TGVC assume no obligation and do not intend to update or revise these forward-looking statements, whether as a result of new information, future events, or otherwise, except as required by law. 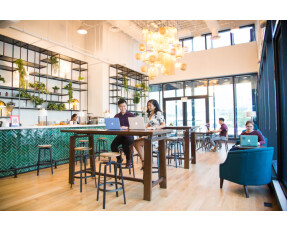