SINGAPORE - Media OutReach - 31 May 2022 - With the rapid digitalisation of workplace processes today, more than four in five employers (84%) say that there is an increasing need for employees across various job roles and departments to have basic coding skills and knowledge. Almost a third of employers (31%) reveal that more than 50% of job roles within their organisation require basic and advanced coding skills.


These are some of the key findings from NTUC LearningHub's recently launched Industry Insights report on Coding, to uncover the importance of acquiring coding knowledge, the demand for tech-lite and tech-heavy roles, as well as the priority skills required of employees.

The report is based on a survey with 200 business leaders across various industries in Singapore, and interviews with industry practitioners and experts from NTUC LearningHub and its training content partners. It also offers recommendations on how aspiring coders from varying backgrounds and level of competency can upskill in coding to further their careers.

Commenting on the report findings, NTUC LearningHub's Director of Infocomm Technology, Anthony Chew says, "In today's highly digitalised world, the ability to code is a critical skill even for non-tech employees as it will enable them to create value for their organisations. As companies increasingly adopt the use of low-code platforms, it is now possible for business users to develop applications, carry out data analysis, create machine learning models, and automate tasks. This results in employers looking for individuals with coding skills to utilise this technology. Additionally, by learning how to code, employees are able to communicate more effectively with technical teams and gain a greater understanding of technology, which increases efficiency for companies when it comes to implementing digitalisation initiatives."

Wen-Ming Wong, Vice President and Managing Director of South-East Asia, UiPath, says, "With the power to help organisations operate more strategically and maximise their teams' potential, low code automation stands at the forefront of software development. Low code platforms are ushering in the future of work – one that's democratic, efficient, and automated. Adoption of low code tools increases business output and extends the practice of software development to less technically inclined individuals. Not only does it take the responsibility of developing lower-level applications from IT teams, but it also empowers employees who already desire the opportunity to work more with automation. The automated enterprise is an empowered one, and low code is the key to unlocking it."

About NTUC LearningHub
NTUC LearningHub is the leading Continuing Education and Training provider in Singapore which aims to transform the lifelong employability of working people. Since our corporatisation in 2004, we have been working with employers and individual learners to provide learning solutions in areas such as Cloud, Infocomm Technology, Healthcare, Employability & Literacy, Business Excellence, Workplace Safety & Health, Security, Human Resources and Foreign Worker Training.

To date, NTUC LearningHub has helped over 26,000 organisations and achieved close to 2.6 million training places across more than 2,900 courses with a pool of about 900 certified trainers. As a Total Learning Solutions provider to organisations, we also forge partnerships to offer a wide range of relevant end-to-end training. Besides in-person training, we also offer instructor-led virtual live classes (VLCs) and asynchronous online learning. The NTUC LearningHub Learning eXperience Platform (LXP) — a one-stop online learning mobile application — offers timely, bite-sized and quality content for learners to upskill anytime and anywhere. Beyond learning, LXP also serves as a platform for jobs and skills development for both workers and companies.

Demand for Tech-Lite Talent with Coding Skills Continue to Rise, As Companies Increase Digitalisation of Their Business Processes 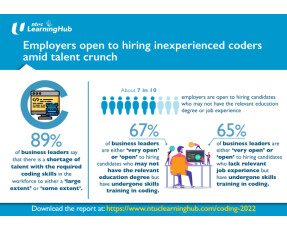