SINGAPORE - Media OutReach - 31 August 2021 - The upcoming Singapore Convention Week (SC Week) 2021 will bring together leaders from the legal, business and government sectors in the international dispute resolution scene. Themed 'A World in Transition', the global legal conference will be held virtually from 6 to 10 September 2021. Participants will discuss the latest trends and innovations in international dispute resolution amidst a fast-evolving business landscape in the COVID-19 pandemic era and beyond.

SC Week 2021 is organised by the Singapore Ministry of Law (MinLaw), in collaboration with supporting partner organisations (see Annex A and Annex B). The week-long series of events consists of:

(i)       UNCITRAL Academy: An inaugural event jointly organised by MinLaw and the United Nations Commission on International Trade Law (UNCITRAL), this key highlight of SC Week 2021 comprises fireside chats, panel discussions and capacity-building workshops featuring C-level executives and industry heavyweights. Singapore's Minister for Home Affairs and Minister for Law Mr K Shanmugam SC, Singapore's Minister for Culture, Community and Youth and Second Minister for Law Mr Edwin Tong SC and UNCITRAL Secretary Ms Anna Joubin-Bret, together with over 40 leading global experts, will share their views and experiences on the evolution and increasing relevance of cross-border alternative dispute resolution (ADR) solutions for businesses, and how companies and practitioners can successfully navigate the complex business environment in today's world in transition. Discussion topics include the Singapore Convention on Mediation, the role of international dispute resolution amidst COVID-19, future trends in ADR, ADR in emerging markets, intellectual property dispute resolution and the potential uses of mediation in debt restructuring and insolvency. UNCITRAL Academy will be held on 7-8 September 2021.

Mr K Shanmugam SC, Singapore's Minister for Home Affairs and Minister for Law, said: "There has been increasing demand for practical, efficient and cost-effective cross-border dispute resolution mechanisms. During SC Week 2021, these issues will be discussed. This will be of interest to businesses around the world, particularly in the current times. We are proud to partner UNCITRAL in this effort to make international trade easier for businesses."

Ms Anna Joubin-Bret, Secretary of UNCITRAL, said: "At the signing ceremony of the Singapore Convention on Mediation in 2019, we had highlighted that signing and ratification were merely the first step towards the promotion of a harmonised framework for international mediation, and that the second and crucial step would be implementation. We are proud to co-organise the inaugural UNCITRAL Academy with MinLaw, and to be a part of SC Week 2021. Such events play an important role in advancing implementation. We hope that these events will help in further increasing awareness and promoting the use of mediation around the world, alongside other dispute resolution processes."

The Singapore Convention on Mediation, also known as the United Nations Convention on International Settlement Agreements Resulting from Mediation, provides an effective avenue for parties to enforce mediated settlement agreements for cross-border disputes. The Convention opened for signature on 7 August 2019 in Singapore, with 46 signatories. To date, the Convention has 54 signatories,  and six Parties. It entered into force on 12 September 2020. (For more information, please refer to Annex C).

Visit https://www.singaporeconventionweek.sg/ to register for SC Week 2021 and get the latest updates. 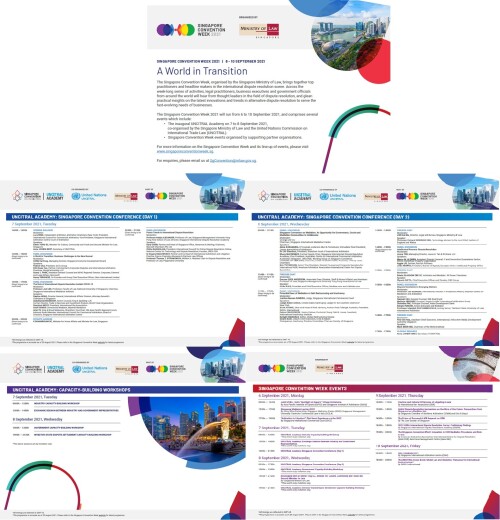 Applicability of the Singapore Convention

List of Countries that Signed and Ratified the Singapore Convention

Note: Countries that have ratified/approved the Singapore Convention are denoted with an asterisk (*) 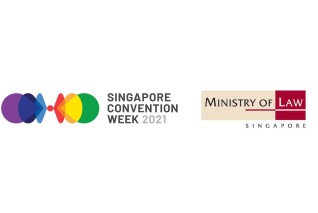 The mission of the Singapore Ministry of Law (MinLaw) is to advance access to justice, the rule of law, the economy, and society through policy, law and services. MinLaw drives legal reforms, oversees the policy for the development, promotion and regulation of Singapore's legal sector, and advances Singapore's national interests through international legal policy and cooperation. In addition, MinLaw licenses law practices, registers foreign-qualified legal practitioners, regulates moneylending and pawnbroking, supervises precious stones and metal dealers, and provides community legal services such as legal aid, community mediation, insolvency administration, and public trustee services. MinLaw also oversees land policy and administration and the development of Singapore's intellectual property sector, supported by its statutory boards.