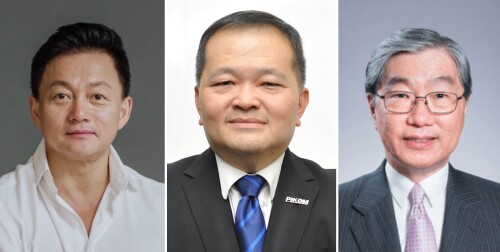 Its executive chairman and CEO Dr Sean Seah said that Angkasa-X, in partnership with Silkwave Holdings Limited (Silkwave) that currently operates two GEO-satellite platforms, is set to establish a space technology ecosystem in Penang and to nurture the state into a supply chain and distribution hub for global satellite technologies for the ASEAN markets.

Silkwave is a subsidiary of CMMB Vision Holdings Limited (HKEX:471) that is traded on the Hong Kong Stock Exchange and which engages in the provision of media and transmission services (CMMB).

Sean said that the Penang space technology ecosystem would also encompass key satellite industries and academic institutions, with a focus on research and development, coupled with intellectual property creation of next-generation satellite technologies and applications customised specifically for ASEAN.

"In our efforts to further boost the space technology ecosystem in Penang, we would also be seeking support from Hong Kong to recruit global satellite technology providers to establish their research and development and localisation centres in Penang for low-tariff market access to other ASEAN countries," said Sean.

He was speaking after a Memorandum of Understanding (MoU) between Angkasa-X and Silkwave to establish a joint-venture strategic partnership to develop the world's first Geostationary (GEO) - Low-Earth-Orbit (LEO) integrated satellite network and service platform for ASEAN communities.

Penang chief minister Chow Kon Yeow described the partnership as an 'innovative breakthrough' for the state: "I would like to congratulate both Angkasa-X and Silkwave for this collaboration which is expected to further elevate the liveability stature of Penang, one of the key goals of Penang 2030."

"Penang has attracted strategic investments in the past years, which translated into creating thousands of high-quality job opportunities. With this strategic effort to transform Penang into a regional space technology ecosystem hub, it is set to attract more FDIs (foreign direct investments) into Penang," added the chief minister.

From Jan-2019 to Mar-2020, Penang attracted RM24 billion of manufacturing investment inflows, out of which, 90% are from the electrical and electronics, equipment and medical technology industries.

Particularly, Penang FDI accounted for 34% of Malaysia's total FDI during the period, underscoring the State's role in driving the country's participation in the global supply chain, as well as MNCs' continued confidence in the state as a conducive and sustainable investment destination.

This GEO-LEO integrated satellite platform serves to address the region's varying needs in Internet connectivity, multimedia infotainment, vehicle-connected services, precision tracking and navigation, environmental monitoring and surveillance, and accelerating digital transformation to grow the digital economy for all communities in the ASEAN region.

GEO satellites circle the Earth above the equator following the Earth's rotation at an altitude of 35,786 km, while LEO satellites are normally rotate in Earth orbits of around 1,000 km but could be as low as 400 km above the surface of the earth.

"This partnership is set to accelerate the ASEAN countries into becoming full-fledged and advanced digital economies, while enabling Angkasa-X and Silkwave to become ASEAN's first GEO-LEO satellite services operator through the 'A-SEANLINK Satellite Constellation'," said Sean, who also serves as the deputy chairman of both the Malaysian National Tech Association (PIKOM) and The World  Information Technology and Services Alliance (WITSA).

Although the 11 ASEAN countries today has a population estimated at 675 million people, it is estimate that over 50% or some 350 million people living in remote rural areas have inadequate or no Internet connectivity.

"Even in most cities, Internet access is widely under-provided, as it is plagued by insufficient bandwidth, high infrastructure cost, poor coverage, and expensive data charge," said Silkwave chairman and CEO Charles Wong.

"The inadequate Internet service is a major bottleneck hindering the region's digital economic transformation. Satellite Internet is seen as the most effective and ease to deploy solution to alleviate such problems and to further narrow the digital divide with developed countries," added Charles, who is also chairman and CEO of Silkwave's parent company CMMB.

Both companies would also be marketing the combined products and services under a joint service provider agreement to effectively penetrate the ASEAN economies.

Under the MoU, Angkasa-X and Silkwave are also aiming to create the ASEAN-Greater Bay Area Space-Satellite Industry Alliance to accelerate technology and investment transfer to develop the ASEAN region as one of the world's largest satellite markets.

"The partnership is the first between a GEO and a LEO platform, which will bring about unprecedented synergies such as universal connectivity along with abundant low-cost and innovative infotainment and broadband data services to mass-market consumers throughout the ASEAN region," explained Charles.

"It is set to usher in a new era of digital transformation for ASEAN, which see the region leapfrog into becoming one of the largest and most advanced satellite service markets in the world."

On the funding part, the Bank of Asia (BOA), licensed and regulated by the authorities of the British Virgin Islands, has been appointed as the global financial advisor for outreach to investors from ASEAN, the United Arab Emirates, Hong Kong and the United States of America. BOA is involved in the consummation and further fund raising for Angkasa-X and Silkwave developments. Together with its partners, BOA is creating a 'Space Fund' in Hong Kong to invest in Angkasa-X, Silkwave and other space technology development projects in Asia.

Meanwhile, Bank of Asia chairman Carson Wen said: "Bank of Asia is very privileged to be involved in the Angkasa-X and Silkwave joint venture, and we are very excited with the huge 'blue ocean' ahead while also playing our part for underserved communities."

"This is the coming together of like-minded people with the expertise, resources and commitment to provide connectivity, infotainment and other valuable satellite-services to the ASEAN population and enterprises at large," added Carson.

ANGKASA-X is a Technological-social Inclusion Company that strives to provide Internet Connectivity as a Necessity for the betterment of mankind. It consists of a group of companies investing in research & development, IP creation, technology & components sourcing, assembly-integration-testing, launching and maintaining state-of-the-art Low-Earth-Orbit (LEO) satellites. By offering an innovative Satellite-as-a-Service (SaaS) to countries in ASEAN, Angkasa-X's mission is to provide satellite internet-connectivity and other services to remote rural areas in the countries in ASEAN and neighbouring countries to establish ASEAN Space Economy via the formation of A-SEANLINK LEO Satellites Constellation. Angkasa-X plans to raise funds from the global capital market to invest and operate A-SEANLINK LEO Satellite Constellation. It aspires to be a Unicorn and the number one unique company for LEO satellite-based Internet services in ASEAN region. For more information on the company, please visit

SILKWAVE, a member of SILKWAVE Holdings and its affiliate CMMB Vision Holdings Limited, is the world's first dedicated mobile multimedia infotainment and application provider that combines mobile satellite broadcasting with terrestrial cellular connectivity via Converged™ technology to deliver high-quality, low-cost, live, and on-demand multimedia and data services. It has a Geosynchronous Earth Orbit (GEO) satellite platform over Asia and developed end-to-end ecosystem support. CMMB Vision is a Hong Kong main board listed company and a digital multimedia and satellite service and application provider holding 20% stake of SILKWAVE and is its de facto management. For more information on the company, please visit