HONG KONG SAR - Media OutReach - 19 May 2022 - HSBC and The Hong Kong Federation of Youth Groups (HKFYG) Youth Research Centre today (19 May) published a study on The Competitiveness of Hong Kong's Young People in the Greater Bay Area. The respondents – 720 local university students who have shown an interest in developing their careers in the mainland cities in the Greater Bay Area (GBA) – are most interested in working in three sectors: cultural and creative (17.9%); financial services (17.6%), and technology and innovation (17.2%) [Table 4, the electronic copy of the Appendix, same hereafter].

The study attempts to establish a framework for the five key skills to boost employability in the GBA. Respondents were asked to assess their own competitive advantages against this skills framework. The findings reveal that university students perceive themselves to be competitive in the GBA. On average, students display the greatest confidence in their professional ethics (8.38 out of 10), Putonghua skills (8.04), and flexibility and adaptability to change (7.78), while ranking digital literacy the lowest (6.17) [Table 7].

Among respondents, 79.7% agree that "the outlook for a business startup in the GBA is positive", with 90.1% acknowledging that scholarship and seed funding are helpful to their career development in other GBA cities [Table 10]. However, challenges remain, with 70.9% of respondents believing that young people in Hong Kong are unaware of the opportunities springing up in the GBA [Table 3]. Participants cite their key challenges as being a lack of networks in mainland China; competition from Mainland talent; and an inadequate understanding of the Mainland judicial system [Table 8].

When asked how young people could best embrace the opportunities in the GBA, 63.9% of respondents are willing to join GBA-based work experience programmes or internships. Respondents also highlight a desire to understand industry outlooks (51.4%) and participate in activities, workshops or knowledge exchange programmes about the GBA (41.3%) [Table 9].

A group of 16 GBA experts, scholars and employers were interviewed for this study. Collectively, they believe that the comparatively strong English language skills of young people in Hong Kong, coupled with their global vision, could improve the service quality of Mainland enterprises and help these enterprises open doors to international markets. However, competition for jobs is intense in the GBA and Hong Kong is not the only source of talent for employers. To increase their employment prospects, Hong Kong youth will have to improve their professional skills, and develop a good understanding of the GBA's planning, policies and industry prospects. The expert group suggest that young people interested in working in other GBA cities should target the industries and cities that best suit them. They should also treat the experience of working in the Mainland as a step in their career development, using the GBA experience to enrich their resumes and advance their career pathways.

The study also interviewed 26 young Hong Kong people studying, working or starting up businesses in the Mainland cities of the GBA. They agree that immersing themselves in the culture and lifestyle of other GBA cities has deepened their understanding of the region and kept them abreast of its development. While the pandemic has inevitably extended their stays in the GBA, some interviewees working in the GBA report a deepened understanding of life in the area.

Daniel Chan, Head of Greater Bay Area, HSBC, said, "Since the GBA development framework was announced in 2017, economic policies and infrastructure projects implemented have brought much closer the cooperation among Guangdong, Hong Kong and Macao. At present, there are more than 85,100 residents from Hong Kong and Macao that have registered for employment in Guangdong. If Hong Kong is to reap the full benefit, it is vital that our next generation gains first-hand understanding of the whole GBA economy's breadth and depth. As a large private sector employer in the GBA, we are glad to see that Hong Kong university students are open-minded about career opportunities in the region. GBA is a focus of HSBC's growth strategy in Asia. We are committed to building a sustainable talent pipeline and supporting the future development of the GBA."

In response to the study, Angela Ngai Mei-mui, Deputy Executive Director of the HKFYG, suggested companies to open up more opportunities for internships and consider job rotations between the GBA cities to increase their competitiveness. This would not only strengthen the practical skills of young people within a profession, but also facilitate talent mobility. She also recommended building online learning platforms to cover the five core skillsets and personality traits essential for employment in the GBA. In the long run, these courses should be mutually recognised by Hong Kong and the Mainland to ensure quality control and encourage participation. Furthermore, the study also suggested the need to integrate the concept of career pathways in the GBA into life-planning education for young people in Hong Kong. Through company and factory visits, alongside job shadowing, NGOs can support young people to learn about emerging opportunities in the GBA at an earlier age. 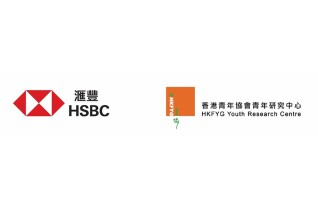 About The Hongkong and Shanghai Banking Corporation Limited
The Hongkong and Shanghai Banking Corporation Limited is the founding member of the HSBC Group. HSBC serves customers worldwide from offices in 64 countries and territories in its geographical regions: Europe, Asia, North America, Latin America, and the Middle East and North Africa. With assets of USD3,022 billion at 31 March 2022, HSBC is one of the largest banking and financial services organisations in the world.

About The Hong Kong Federation of Youth Groups

The Hong Kong Federation of Youth Groups (HKFYG) was founded in 1960 and is now the city's largest youth service organisation. For the past six decades, it has been committed to serving the youth of Hong Kong by providing a variety of services, activities and programmes, which have an annual attendance of nearly six million. We encourage youth to reach their fullest potential, and with community support, we now have over 80 service units. We also have 12 core services, which include the Youth S.P.O.Ts, M21 Multimedia Services, Employment Services, Youth at Risk Services, Counselling Services, Parenting Services, Leadership Training, Volunteer Services, Education Services, Creativity Education and Youth Exchange, Leisure, Cultural and Sports Services, and Research and Publications. Our aim is to motivate young people to grow into responsible and dutiful citizens and we now have over 250,000 registered volunteers and over 450,000 registered members. We believe that our motto HKFYG * Here for You reaffirms our commitment and dedication to the young people of Hong Kong. For more details, please visit