RIGA, LATVIA - Media OutReach - 10 December 2020 - The developers of ONLYOFFICE, an open-source and highly versatile office suite currently attracting a great deal of interest from users in China and throughout the Asia-Pacific region, have launched two important releases: version 6.1 of the desktop and online editors, which incorporates some long-awaited features, including Sheet View and endnotes, and importantly support for Apple's ARM processor architecture; and version 5.0 of ONLYOFFICE Documents for Android.

The Sheet View feature significantly eases collaborative work on big spreadsheets. With its help, users can create a filter that only changes their own view of the data, without affecting that of their collaborators. Views can be named views and saved for further use. The views create will be available to anyone who has full access to a file. Also possible is the creation of different sheet views for collaborators, so that they can quickly access the most relevant information.

Working with charts in ONLYOFFICE spreadsheets has also been improved. Data series and categories can be easily edited and rearranged, as well as change the way that data is plotted by swapping rows and columns.

The document editor now allows working with the new types of references that can be useful for academic work -- endnotes and cross-references.

Endnotes, which are references placed at the end of a section or at the end of the document itself, can be created and edited, and also be converted to footnotes and vice versa; They can also be swapped or deleted with one click.

Cross-references allow users to create links to other parts of the document being worked on -- charts, tables, bookmarks, and so on. They appear as links that take the reader to the referenced item.

With version 6.1, the ONLYOFFICE document editor can automatically count the lines in a document and display the number beside each line of text. This is useful when it's necessary to refer to specific lines in, for example, a legal contract.

All three editors have also gained new proofing options --math autocorrect options for equations can now be edited, and users can decide which expressions should be recognized as functions. In documents and spreadsheets, users can also choose whether they want to use autocorrect as they type, and to create numbered or bulleted lists automatically.

The ONLYOFFICE developers have also released version 5.0 of ONLYOFFICE Documents for Android, a free office app for managing and editing office files stored in ONLYOFFICE, third-party clouds, and on devices.

The new editor allows customizing of presentations with themes, managing slides, changing their layout and background, and applying different transitions.

It includes text formatting tools, allowing the user to choose the font, its size and color, and apply decorative styles, including double strike-through, subscript, and superscript. It's also possible to set line spacing, create lists and add links.

There are also plenty of options for working with objects; users can insert and manipulate images, shapes, and tables.

ONLYOFFICE Docs is an office suite that includes editors for text documents, spreadsheets, and presentations.

Community or Enterprise versions can be used within ONLYOFFICE Workspace, an open-source productivity solution for managing docs, projects, clients, emails, and timetables within the enterprise internal network.

ONLYOFFICE Docs can be integrated with popular sync and share apps, such as ownCloud, Nextcloud, and Seafile.

Get on Google Play -- https://play.google.com/store/apps/details?id=com.onlyoffice.documents

New version in the official blog -- 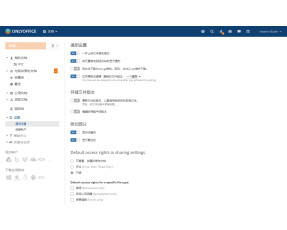